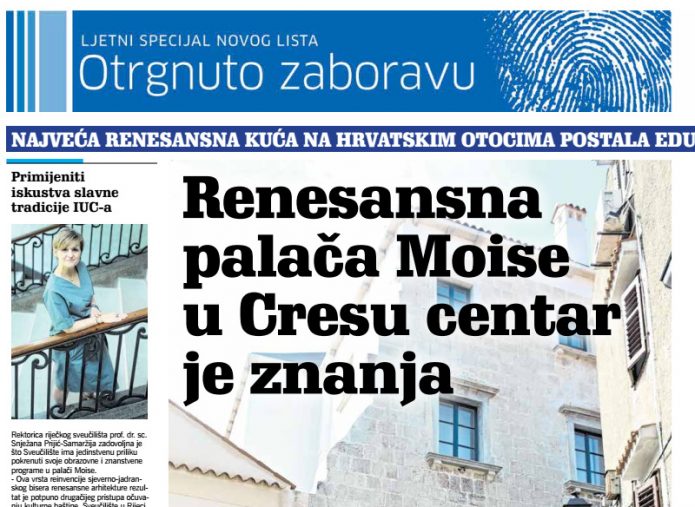 The Croatian island of Cres is an outstanding place to plan getting lost in while discovering its bays and ports, old towns and narrow paths, chimerical legends, and the cultural heritage dating since the Roman days. In 2020, Cres became even more engaging for the intellectual wanderer due to the opening of the Moise Palace, a 16th-century palace the islanders never knew they had. On July 24th, Rijeka’s daily paper, the Novi list, brought the story of the Moise being “Torn from Oblivion”. The 500-year-old patrician palace has this year become the University of Rijeka’s educational and research center, prior to which it was a famous ruin, erroneously considered to have been an old residential complex. The reason for its neglect during the 20th century was in its being inhabited by the poor and the outcast in society, so the building got nicknamed “Biafra”, as to indicate the caste it stood for during this time. It was only in the late 2000s that the newest research found the “old ghost house” to in fact be the largest Renaissance palace on the Croatian islands. Build in the mid-1550s, the Moise Palace once belonged to the famous aristocratic family of Petris. Given that the Petris collaborated with the Habsburg Empire, their presence was precarious in the then Venetian Cres, yet the family persevered, leaving traces of their political thought, interests, and education in the shapes of the many symbols and murals found in the palace. The palace was added-on in the 19th century, then belonging to another Croatian-Italian aristocratic line, the Moise, thus inheriting the name. This chimerical legend, a palace standing on a natural water spring in the middle of the old-town Cres, now stands to tell yet another interesting story, one which has just begun. Today, the Moise Palace is a scientific-educational center, an island hub run by the University of Rijeka, where it’s all about being present, dynamic, informed, connected, and – hybrid. The palace is conceived to stand out both as a place and as a principle: to serve the community whilst charging it with new practices and knowledges, and sharing its own local knowledge with the world in an engaging and intimate (personal) way.

For this reason, two of the University’s centers are running the Moise now: Centre for Advanced Studies Southeast Europe and the Centre for Studies and Lifelong Learning. To make things simple, the job of the one university Centre (CSLL) is to share Cres with the world, while the other Centre (CAS SEE) is to bring the world to Cres, doing so by fulfilling its core activities of coordination and research work of visiting postdoctoral scientists. The CAS SEE also organizes activities that follow the construction of new economic paradigms by developing a business culture focused around the man and his work. So, the Moise is to expect “a flux of persons and goods in the winter period, after the tourists have gone, when the rains start immersing the narrow passages and aqua alta reaches the palace. Questioning the uncomfortable position of “academic tourists” and looking for elements that disturb the setting from inside, our guests can challenge their traveler’s comfort zones and immerse into the urban-cum-natural tissue of Cres, in order to develop both locally and globally meaningful research and artistic responses to the materials and signals in situ” – Sanja Bojanić explained, the Executive Director of the CAS SEE. The current Moise Program evolves around various and versatile activities: from the Berlin symphony orchestra “No Borders” rehearsing there this summer, across a specter of engaging lectures and workshops, to an exhibition of the old Cres Dock-09, which has been reinvented for contemporary purposes by an architect infatuated with the island. Much more is to be expected from the Moise Palace in the challenging times to come, and much is planned for the scientific treatment and discussion(s) on issues such as internal migration, settlement dynamics and social practices of the post-war periods in Rijeka, but also for the cognitive and ethno-pragmatic models in the relationship between individuals and public, the reform of the common European asylum system and/or linguistic landscapes, thus bringing and exercising new insights into already known concepts, practices, and worlds.

Architecturally resurrected as an incubator of knowledges and skills, the Moise Palace is becoming a venue and forum for various scientific and research activities, a center welcoming visiting students and artists wishing to withdraw for a moment to a serene and inspiring collaboration setting. In fact, the Moise Palace already is a study haven for those whose intentions are to conduct scientific and artistic work while enjoying the island’s pristine nature. It is a place to restore individual and group wellness while mapping the local and advancing new investigative practices.

Original article (Croatian) is available as a typesetting version on page1, page2, and page3.