A proposal for revitalization and protection of the last remaining floating dock in Croatia from Austro-Hungarian Era, and its conversion into an industrial “living museum” – a new urban platform for culture, creative industries, education and tourism. 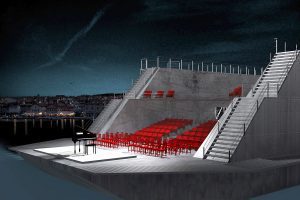 The exhibition will be open on Thursday, October 15th, at 6 pm, at the Moise Palace, on island Cres, where Dock-9 is currently located.

The project outlines how the dock could potentially be transformed, re-invented architecturally and through a proposed change in use, integrated as a layer within the city, as an artifact that tells an authentic story within the cultural history.
The dock is envisaged as a floating “living museum”, the object itself a historic “visitor center”, simultaneously providing a platform for various additional proposed usages. According to the project, in the future, restaurated, the dock could be used as a summer stage for multimedia artistic interventions, an exhibition space for ship models and photographs from maritime history, a stage for events, small library on shipbuilding and space for art studios and residences, lectures, concerts, theater performances, cinema, a berth for two hundred smaller boats, and thus it would generate new artistic contents.

Presented is a potentiality for the integration of this historical object, newly redesigned architecturally, in the urban matter of the city of Cres, or alternatively relocation elsewhere.
Consideration should be given to a significance of the floating Dock-9 object in Cres in terms of cultural-industrial heritage, not solely at the local level, but within the broader context of Europe also. Dock-9 constructed for the Austro-Hungarian navy at the beginning of the last century is not only is the oldest, but it is also the last remaining representative object of this typology left from that era.

19th of June, as a result of public initiative “Dock Culture”, Ministry of culture, governing body for 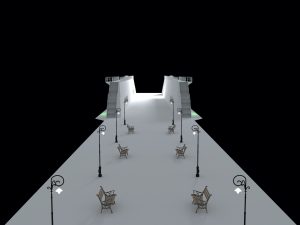 Dock Culture was first presented in 2016 at the Maritime and History Museum of the Croatian in Rijeka, at Governor’s palace. After that it was presented at 7th International Industrial Heritage Conference, Rijeka, gallery of Croatian Association of Interdisciplinary Artists in Pula (2016), Lamparna LAE Underground City XXI Labin (2016) and Days of Architecture in Istria (2016) and in HDD – Croatian design association, Zagreb (2017).

The exhibition is supported by Cresanka dd. and Center for Advanced Studies Southeast Europe, University of Rijeka and Italian community Cres.

Bojana Vuksanović // dip. arh. BArch (Hon) RIBA
Bojana Vuksanović graduated architecture from Edinburgh College of Art in 2003 and did a postgraduate diploma study at Escola Tècnica Superior d’Arquitectura de Barcelona in 2005. Previous to that, she studied architectural engineering in London. She is especially interested in intelligence and beauty of structures derived by Nature and new modes of architectural thinking that focuses on utilizing these processes in design. Currently, she lives in island Cres, Croatia working as a freelance architect and designer. Previously she worked for Daniel Libeskind,Berlin, JM Architect, Edinburgh, Reiach and Hall Architects, Edinburgh. Free-lanced for Cloud-9, Barcelona, Media-Tic project, Underground City XXI Labin, Croatia, Icosis Architects, Edinburgh, Zeroarchitecture, Italy, simultaniously evolving /nCodon platform.
She is a chartered member of Royal Institute of British Architects (RIBA) and member of ULUPUH Croatia (architecture).