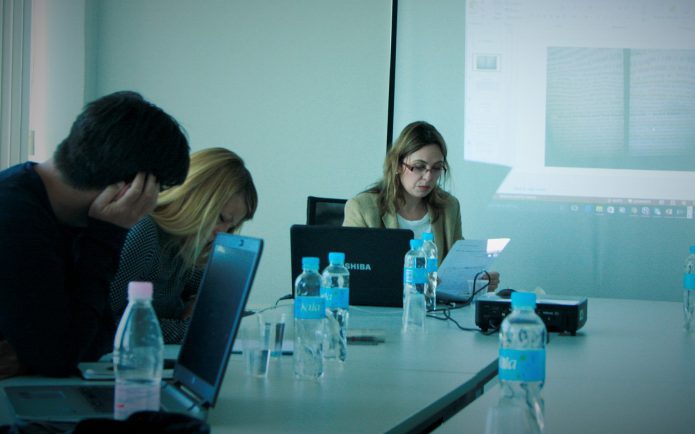 “My project draws on limitrophe cities and interzones within border-zones landscapes and deserted places where abandon, detachment, twisted memory and emotional representation shape the place as liminal and as ontologically uncertain. I argue border passages, which are today spaces deprived from meaning, or rather Phantomgrenzen, such as former Schengen crossings, such as empty and forgotten architectures of the post-Yugoslavian period, where space is under continuous reconfiguration and, at some point, becomes politically critical and artistically relevant. Thus, those spaces, although deprived from substantial phenomenological nexus, are impregnated with the emotional memory of a place that no longer exist; in this sense, they are not places where something ends and something else begins its existence, but rather places where something starts its presencing (to name few actions which gain their semantical denomination at the border crossing itself: smuggling, trafficking, exile, homelessness, expatriation etc.).

I elaborate political meanings of borders, which are perpetually blurred and shifted in tidal geography, the cultural mummification, the erasure of preexisting maps and the revival of “quick sand” porous boundaries. I focus on the production of flows of non-targeted displacements and dislocations, indeterminate journeys and nostalgia for a lost space instigated by the political shattering. I will, therefore, present the border-artwork of Sara Salamon, visual artist from Rijeka, who is disintegrating, misplacing, reinventing and questioning the invisible phantom-border passage between Gorizia and Nova Gorica, unveiling interrelations of cultural mutation processes from former spatial memory towards transitory emotional memory. The goal is to rethink the interconnected mappings, which have become marginalized and diasporic but at the same time a center and a nucleus of cognitive anxiety proliferating movements and unpredictable spatial trajectories. The question I am tackling is: is it so important to draw boundaries, charts and maps when the world has turned culturally liminal, flow and creolizing?” Natasha Sardzoska was born in Skopje in 1979. Researcher, interpreter and translator (IT, FR, EN, ES, PT, MK, SR), Italian language professor, poet, writer, journalist and cultural manager, she has been living and working in Paris, Milano, Stuttgart, Brussels, Lisbon, Belgrade, Heidelberg, Bergamo and Skopje. She holds a Bachelor in Italian language and literature and comparative literature from the University Ss. Cyril and Methodius in Skopje. With the Erasmus Mundus fellowship from the European Commission she has obtained a Master in media and cultural studies from the New University of Lisbon, the University of Perpignan and the University of Bergamo and a PhD in cultural anthropology from the Eberhard Karls University of Tübingen, University of Bergamo and Sorbonne Nouvelle in Paris.She has taught at Schiller International University in Heidelberg, the University for Tourism in Skopje, the University of Bergamo and the South-East European University “Max Van der Stoel”. She is part of the research group Phantom Borders at the Humbolt University in Berlin. She has been working as interpreter for the Senate of the Italian Republic, the Italian Ministry of Justice, the Italian National Antimafia Bureau, the International Organization for Migration, IBF Consulting, the Macedonian Ministry of Defense, the Macedonian Academy for Judges and Prosecutors and the European Commission and as expert in the French National Agency for Higher Education Evaluation AERES. She was editor of the official magazine of the Erasmus Mundus Association, where she was serving as Public Information Officer, and has interviewed well-known politicians amongst which Marielle De Sarnez.