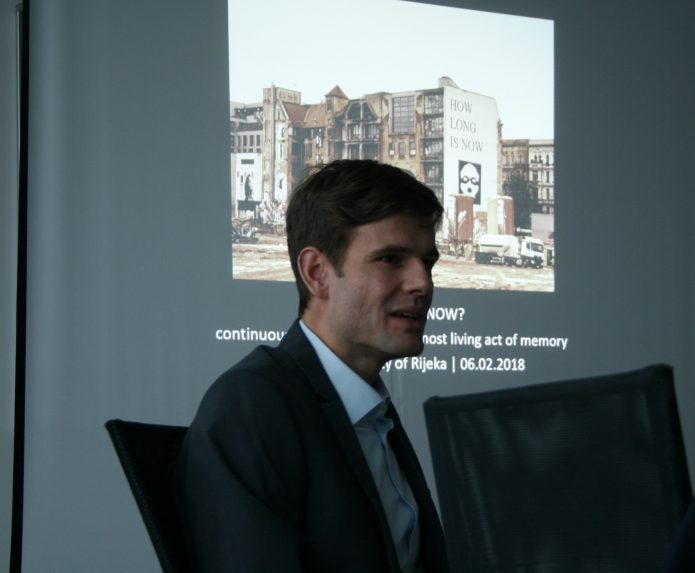 How Long is Now?

“Thinking about architecture, we are confronted with the heritage of former generations as well the questions of how to understand, act on, act with and further develop these structures and how to create today a vision of and for the future. My vision of an interaction with the existing building stock may be summed up with a poetically formulation by Mark Wigley, who names preservation a “forward-thinking celebration of life”. But how can we think forward and celebrate life while respecting the memory as testimony inscribed both materially as well as immaterially into architecture – without creating a death archive? In my opinion, the key to find possible answers lies in a better understanding of the presence of and in architecture first. The objective of my current research work is to re-examine its different dimensions as there are Architecture as thing (“Ding”) in its material presence, the presence for the beholder and Architecture as (re-)presentation of a(n ideal) future.

Based on thoughts of the Ontology of Things, namely inspired by E. Husserl, M. Heidegger and G. Böhme, I want to name the forms of presence ecstasies and distinguish spatiality, eidos, physiognomy and sensation. With the help of this concept I aim to pave a possible path to overcome in a first step the thinking in polarities as inside / outside, essence / expression, the thing as such / aesthetic effect or rationality / affectivity.

The  fourth of the ecstasies bridges over from the material realism of architecture as thing to its reception by the subject, understood as being sensitive for its perceptible presence and emotional impact. To perceive a building is as well to take part on its past and possible future. Looking back, there are traces of testimony in social as well as in historical dimensions. Looking forward, the present stimulates the imagination of the beholder. Thus we are thinking of the relationship of building and beholder via the ecstasies as a double bind, that tries to solve the above named polarities and, at the same time, helps to overcome the division between subject and object. Furthermore there are as well the sensitive qualities of a thing as there are qualities, which has been given by an act of creation.

All three mentioned forms of presence take architecture as a spatial thing out of time. But I suggest to understand architecture as architecture insofar as it gets identity from the event which will have taken place in or as architecture. The event defines the now of architecture. It is not only a confrontation of the person(s) involved and architecture itself but an interaction in and with architecture which gives the opportunity of an active (re-)appropriation of the existing object. An event cannot be planned or be foreseen. It will only be known when it will have taken place. Architecture as framework for upcoming events exists in the tense of the past perfect progressive. This framework is given by the existence of ecstasies. They are created in a process of design and development and can be seen as result of the production aesthetic. The ecstasies are inscribed into the three-dimensional reality of the present building. And they are received in sensitive affection by a beholder who gets into interaction. In result, I aim to open up an understanding of the perception of architecture as a whole of sensitive (ecstasies) and rational (language and semiotics) reception.

The now is longer than any single point in time seems to be. is related to space and temporality, as every single moment in the history of a building seems linked with every other moment in the past, present and future. The further construction of the building stock results in a continuous architecture (Weiterbauen), that allows to understand, write and read “architecture as the most living act of memory” (Jacques Derrida).” After studying Architecture (Diploma) and Art History (Master’s  of Art) at the Technische Universität Berlin, Gerrit Wegener has been conducting research projects at the crossroads of Philosophy, Art History and Theory of Architecture. His doctoral  thesis was on Jacques Derrida  and his  writings on architecture. While seeking to identify and assess the contribution  of  Derrida to the Theory of Architecture, he further explored  the possible contribution of mainly  20th century French philosophy to architectural discourse. In  parallel to his academic work, Gerrit Wegener has been working  as a freelance architect, art historian and professional project manager with a focus on design and construction within existing structures, taking into account aspects of heritage and historical preservation.