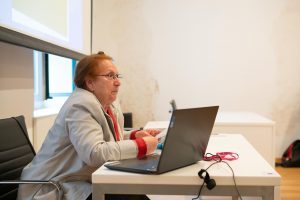 At the beginning of the XIX. in the whole of Europe, including Cres, the former city walls and all other city buildings that lost their previous role were abandoned, so the City of Cres sold the Praetorian Palace to private individuals, and began to use the Fontega building (granary) for its own purposes. At first, there was a city administration, for a time even a public school, and at the end of the XIX. century the building was sold and converted into a hotel. At the beginning of the 20th century, the hotel got another, second floor and a balcony on the first floor of the west facade.

This was the second lecture by Ćus-Rukonić in the Palace after she was a guest in the first season with the lecture “Coats of Arms” in the Moise Palace.