The 2019 summer school Around 1800/2000 – Aesthetics at the Threshold addresses the changing concepts of aesthetics of architecture. With Aesthetica, published in 1750, Alexander Gottlieb Baumgarten founded aesthetics as a philosophical discipline. He conceived aesthetics as a tripartite reflection a) on sensual experience, b) on the concept of beauty, and c) the theory of arts. Focusing mainly on the arts, aesthetics established a new field of knowledge characterized by dialectics between sense and sensibility, perception and artifacts. With the concept of sensory experience and sensory knowledge, aesthetics overcame older philosophical concepts that were purely based on reason. Hence, aesthetic practice became a central part in the development of the practice of cognition. Goethe’s theory of color, with his famous color wheel, and Alexander von Humboldt’s painterly exploration of nature are just a few examples of the emergence of new epistemologies at the threshold between science, theory, and art.

As a mainly material, functional, and constructive cultural technique concerned with everyday practice, architecture didn’t fit the concept of aesthetics that was seen for a long time as being epitomized by the arts, such as painting, literature, sculpture, dance, and music. However, in the wake of the French revolution, the Napoleonic wars, and the advancements of the sciences, the cultural force field around 1800 started to change to a degree that architecture slowly moved from a peripheral position toward the center of aesthetic discourse. Described by Emil Kaufmann as “revolutionary architects”, French architects Étienne-Louis Boullée and Claude-Nicola Ledoux began to extend the concept of structure to spatial expression and the concept of beauty to that of the sublime. But it was architects like Karl-Friedrich Schinkel, Thomas Jefferson, and Sir John Soane that became the agents of the reconceptualization of the humanist basis of architecture. In the first half of the 19th century we witness the emergence of the concept of modern architecture.

Yet, around the year 2000, with the advent of digital technologies, the change of the world order in the wake of the fall of the Berlin wall, globalization processes, and population growth, aesthetics and architecture again underwent major changes. With the beginning of the Anthropocene, the build environment and more particularly architecture found itself in the center of the search for viable concepts for the future. Themes concerning locality, ethnic diversity, gender, posthumanity, sustainability, and media became essential parts of aesthetics.

Beyond a mere historical investigation, the summer school aims to look into the value system of aesthetics of architecture, design, media, and the arts. Methodologically, the comparison of the time around 1800 and around 2000 will help to ground the discourse as well as sharpen the senses for the things changed and unchanged, for the continuities and discontinuities, for the stable and shifting concepts of aesthetics. What are the challenging tasks of aesthetics in regard to architecture? What is architecture’s role in rethinking aesthetics today? What is the status of the concept of building art? Can architecture take a leading role in the shaping of 21st century modern culture, or do we have to consent with Bruno Latour that architecture so far hasn’t been modern at all? Does “modernity” in its true humanist and aesthetic conception still lie ahead of us?

Jörg Gleiter is an architect and head of the Chair of Architectural Theory at the Institute of Architecture at the Technische Universität Berlin.

Dietrich Neumann is Professor of History of Art and Architecture, Director of Urban Studies, Professor of Italian Studies at the Brown University.

Paul Guyer is an American philosopher and a leading scholar of Immanuel Kant and of aesthetics. Since 2012, he has been Jonathan Nelson Professor of Philosophy and Humanities at Brown University.

Petar Bojanic obtained his BA and MA from Belgrade University, his MA from EHESS (Paris) and his PhD from Paris 10. He has taught at Cornell, Aberdeen, and Belgrade Universities. From 2011 he is Director of the Institute for Philosophy and Social Theory of the University of Belgrade.

Christine Blättler is Professor for Philosophy of Science at the Philosophy Department of Kiel University since 2011.

Alessandro Armando is assistant professor of architectural and urban design at the Polytechnic University of Turin, from which he holds a Ph.D. in Architecture and building design. 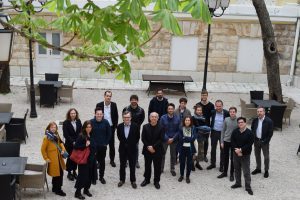