In addition to coordinating a team of historians researching the history of postwar Rijeka, the project Rijeka in Flux, supported by the Social Science and Humanities Research Council of Canada, explores innovative ways of communicating history to a larger public. Elaborating on the concept of space, and bringing together historical and geographical knowledge, as well as expertise from the digital humanities, the project has produced two digital tools. An interactive map based on crowdsourcing, developed between 2015 and 2017, allows the user to upload and share contents on the city’s history, thus giving space to different memories and narratives. More recently, an augmented reality mobile phone app, which will be soon released, provides the user with the opportunity to have an embodied experience of the past, either autonomously, or guided by a historian. How can public history benefit from the digital humanities? What challenges has the project encountered, and what has it learned from them?

Brigitte Le Normand is Associate Professor of History, and Academic Director of the Public Humanities Hub at the University of British Columbia Okanagan.  Since 2015, she has been exploring the potential of interactive maps for changing our understanding of the past, using Rijeka as a case study.

Jon Corbett is an Associate Professor at the University of British Columbia Okanagan. He the director of the Spatial Information for Community Engagement (SpICE) Lab. His work explores how digital maps can be used by communities to document, store and communicate their spatial knowledge.

Vanni D’Alessio teaches Modern and Contemporary History at the Department of Social Sciences of the University of Naples, where he also leads the Digital History Laboratory. He is one of the authors of the digital historical map “Rijeka-Fiume, a Historical Narrative” and one of the researchers involved in the elaboration of the texts for the smartphone application “Rijeka Fiume App”

Francesca Rolandi is a joint fellow at the Center for Advanced Studies South East Europe and the University of British Columbia Okanagan. She has contributed to the mobile phone application “Rijeka Fiume App” with markers and a guided tour, and took part in the related communication activities and strategies. 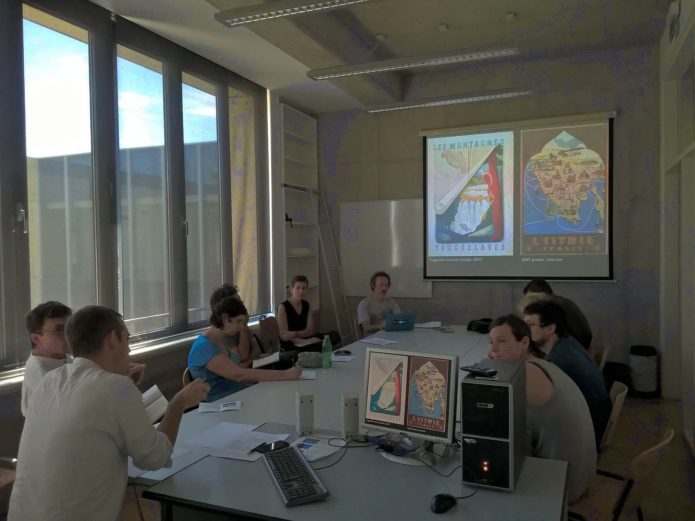 The History Rijeka Seminars – Riječki SeminaRi are jointly organized by the Department of History (Faculty of Humanities and Social Sciences) and the Center for Advanced Studies – South East Europe (CAS SEE) at the University of Rijeka, Croatia.
The first seminar was held on Thursday, June 30, 2016 at the Department of Art History (4th Floor, Room 470) at the Faculty for Humanities and Social Sciences.

“Raša, remnant infrastructure, and the mental re-mapping of a Fascist New Town” by Matt Worsnick (Parsons School of Design / SVA MA in Design Research Writing and Criticism, New York) in dialogue with Luka Skansi (Department of Art History, Rijeka) and Vanni D’Alessio (Department of History, Rijeka).
The seminar was divided in three different sessions: Architect and Historian Matt Worsnick (New York) presented a segment of his research on architecture in contested territories in the Adriatic during Fascist Italian and Socialist Yugoslavian sovereignty, and in particular disussed the case the Istrian mining town of Raša/Arsia, established during the Italian fascist regime and functioning during Socialist Yugoslavia.
Luka Skansi (Rijeka, Venice, Ljubljana) and Vanni D’Alessio (Rijeka, Naples) commented his research.

The second session was based on the researches on cultural and public diplomacy, music and other American influences in former Yugoslavia by Carla Konta (Trieste and Rijeka) and Nela Erdeljac (Zagreb), who presented a portion of their PhD projects, in dialogue with Francesca Rolandi, author of Con ventiquattromila baci. L’influenza della cultura di massa italiana in Jugoslavia, Bologna 2015), a book on the influences of Italian popular culture in 1950’s-1960’s Yugoslavia.

Roundtable: “Exploring Socialist and Yugoslav Rijeka and Beyond”

The last session was dedicated to new researches on Socialist and Yugoslav Rijeka. Vanni D’Alessio and Andrea Roknić Bežanić, both assisting professors at the Department of History and former CAS SEE Fellow Marco Abram, a research scholar of the same department, along with Brigitte Le Normand (U. British Columbia, Kelowna). During this session Brigitte Le Normand, Vanni D’Alessio, and Dorjan Lečki (U. British Columbia, Kelowna) presented and discussed with the audience the Interactive map project  Rijeka/Fiume, a Historical Map.