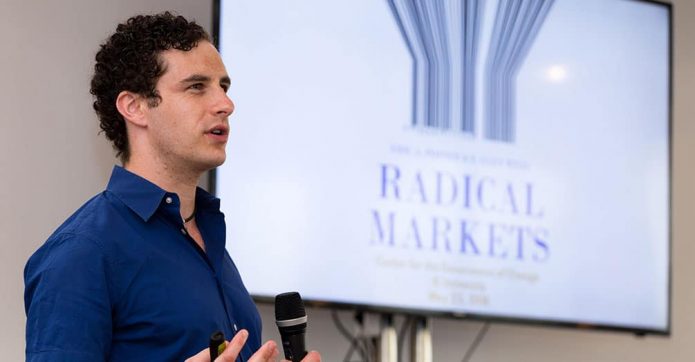 Sparked by E. Glen Weyl’s research into social technologies for widely-shared prosperity and cooperation under diversity, RxC has since developed into a research agenda and a social movement gathering social scientists, technologists, artists, activists, and entrepreneurs dedicated to discovering institutional mechanisms conducive to fair, prosperous and equal pluralistic societies.

In his talk for CAS SEE, E. Glen Weyl presented the evolving vision of RxC, first outlined through the series of fundamental reforms to existing democratic and capitalist institutional orders presented in his 2018 book with Eric Posner, Radical Markets: Uprooting Capitalism and Democracy for a Just Society. These included Quadratic Voting, as a voting mechanism which allows people to communicate the degree and not only direction of their preference; Common Ownership Self-Assessed Tax, as a new property system which would block the formation of monopolies while producing higher increased returns and greater social wealth, shared equally by all; and Data as Labour, which would compensate citizens for their data and, moreover, allow them to collectively bargain for a fair data wage. Aside from being the Founder and Chair of the RadicalxChange Foundation, E. Glen Weyl is Microsoft’s Office of the Chief Technology Political Economist and Social Technologist (OCTOPEST), advising Microsoft’s senior leaders on the relationship between the global political economy and the future of technology and leading a group of socially-engaged communicator-researchers who are working to imagine and communicate a pluralistic future for technology that empowers human collaboration, creativity and communication. Glen’s work focuses on “political economy”, a philosophically-inclined field of inquiry that gave birth to modern economics, sociology, and political science, as a way to build “social technology”, algorithmic designs for social institutions. He has developed these ideas through academic research in a range of fields, for example articles published in the American Economic Review, Science, the Proceedings of the ACM Conference on Economics and Computation, the Harvard Law Review and Politics, Philosophy and Economics and has taught at Princeton and Yale. Following Radical Markets: Uprooting Capitalism and Democracy for a Just Society, his work has moved significantly beyond research and he increasingly helps mobilize activist groups, consults for governments and political parties, advises start-ups (especially in the blockchain space) and collaborates with artists.