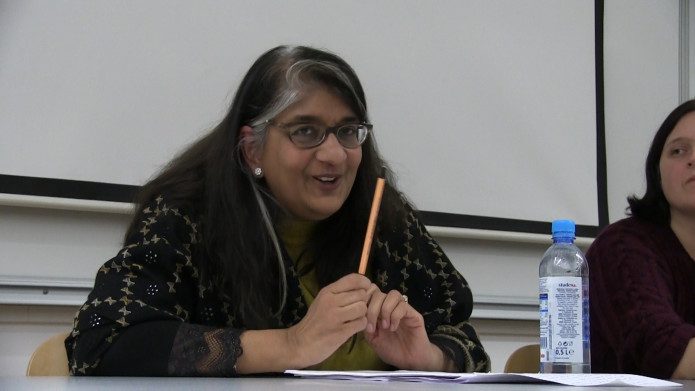 Fragmented Sovereignties in an Era of Globalisation: Challenges for Cunning States and Citizens

On 24th November, 2015, Shalini Randeria, Professor of Social Anthropology and Sociology, Rector of the Institute for Human Sciences (IWM) in Vienna, held a lecture organized by Center for Advanced Studies in collaboration with Department for Cultural Studies, (Faculty of Humanities and Social Sciences) at the University of Rijeka.

“Two parallel developments since the 1990s have eroded the control of the nation-state over its territory and population. The increasing importance of supra-state actors (international institutions like the IMF, World Bank, EU) in domestic policy making has constrained the autonomy of states, on the one hand. The rise of sub-state actors (warlords, social movements) challenge the authority of the state from within, on the other. The resulting fragmentation of sovereignty poses problems for the state, which is expected to deliver ever more under conditions that weaken it externally and internally. However, it will be argued that often cunning states strategically claim weakness to mask the lack of political will in certain domains of governance. The talk will also analyse the dilemmas of these developments for the exercise of citizenship rights in a landscape of blurred boundaries between the public and the private.” – Shalini Randeria

Shalini Randeria is a professor of Social Anthropology and Sociology at the Graduate Institute, a position she has held since autumn 2012. She has been Research Director at the Graduate Institute, and Rector of the Institute of Human Sciences (IWM), Vienna, since January 2015. She is Visiting Professor at the Social Science Research Centre Berlin (WZB). She is a former Member of the Senate of the German Research Council (DFG), President of the European Association of Social Anthropologists (EASA) and a Fellow of the Institute of Advanced Studies, Berlin. She was Max Weber Professor for Sociology at the University of Munich, Professor of Social Anthropology at the University of Zurich as well as Professor and Chair of the Department of Sociology and Social Anthropology of the Central European University Budapest. She currently serves on the Advisory Board of the Wenner-Gren Foundation, New York, and on the Editorial Board of the Annual Review of Anthropology. She has published widely on the anthropology of globalisation, law, the state and social movements. Her empirical research on India also addresses issues of post-coloniality and multiple modernities.