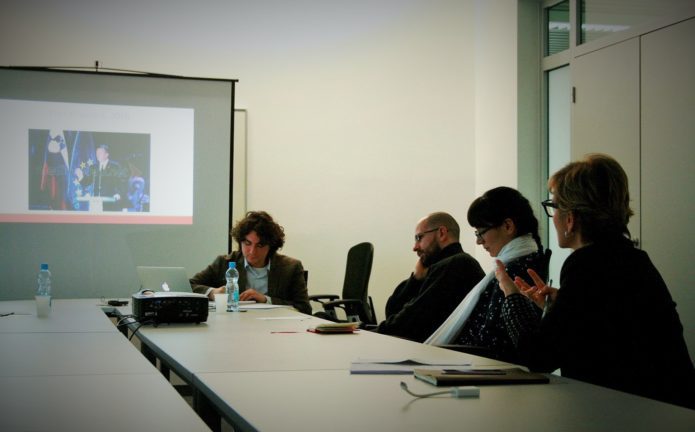 The Slovene Reaction to the European Migrant Crisis: Class and Ideology at the edge of Schengen

“The European response to the 2015 migrant crisis was initially featured by warm welcome expressions from the European elites. However, it quickly evolved into the enhancement of extremist positions and the ‘Fortress Europe’ pretension. The opposition to the limited relocation and resettlement plan of the European Commission – initially led by several Eastern European countries – ended up in the conclusion of an agreement with Turkey for the return of asylum-seekers to that country. Along this process, governments, mainstream political parties and new far-right organizations have shaped cultural-related and seemingly technical discursive lines for rationalizing the exclusion and rejection of migrants.

In this seminar, I will discuss the suitability of the idea of fascism for denoting current political developments in Europe through the analysis of a peripheral country. Peripherality makes reference to dynamics of economic hierarchisation, but also to specific political dynamics, including, in the Slovene case, questions like the justification of the closure of the ‘Balkan route of refugees’ on the assumption of the government’s responsibility to protect the Schengen external border and the intention of remaining in the core of an eventual multi-speed Europe. The key point of the discussion consists on the identification of specific political processes and dynamics of social change beyond traditional categorisations of political actors, which have become increasingly blurred.” Carlos González Villa is a postdoctoral fellow at the CAS SEE (University of Rijeka) and member of the Research Group on Current History. He completed his PhD in Political Science in 2014 at the Complutense University of Madrid, with a thesis that addressed the process of Independence of Slovenia and its international implications. He has a strong research interest in the foreign policy of the United States towards Yugoslavia during the crisis of the dissolution. He has recently started a new research line on the ideological drift of Eastern European elites. He has been a visiting scholar at the School of Advanced International Studies of the Johns Hopkins University (Washington DC) and the Faculty of Arts of the University of Ljubljana.