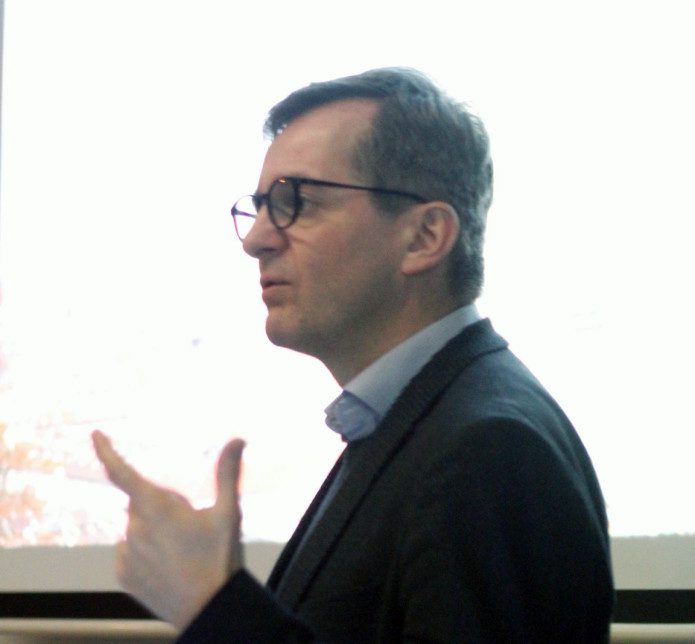 Architecture and Philosophy: Nietzsche, Décadence and the Physiology of Architecture

On 19th February, 2016, Jörg H. Gleiter, Professor and the Head of the department of Architectural Theory, but also the managing director of the Institute of Architecture of Technische Universität Berlin, held a lecture organized by CAS SEE at the University of Rijeka.

In April 1888, in a tempestuous finale after arriving in Turin, Friedrich Nietzsche noted that this was the first city that was more “a paradise for the feet” than for the eyes. On December 16, 1988, he wrote in a letter to Heinrich Köselitz: “Recently I said to myself: to have a place that one does not want to leave, not even to go into the countryside—where one is glad to walk the streets! Earlier I would have thought it impossible.”
Whereas earlier Nietzsche, as the hermit of Sils-Maria, had found his philosophical inspirations, like Plato, walking in open nature, now in Turin he seemed to have switched to the side of Socrates. While Plato had withdrawn from the city to the quiet of the olive groves, i. e. to the groves of Academe, for Socrates, as Nietzsche noted, the whole city, the stoa, the streets, and the agora were places to stimulate his philosophical activity. As one could “walk through high archways for half hours in one breath”, in spring 1888 in Turin, just like Sokrates, Nietzsche enjoyed wandering among the arcades of Turin like a “philosophical flaneur”.
Nietzsche’s discovery of the city took place against the backdrop of his turn away from music as a “separate art” [Sonderkunst] of the nineteenth century and toward architecture as the “leading art” [Leitkunst] of 20thcentury’s modernism. Unnoticed in the 100 years of Nietzsche studies finally we have to take notice of Nietzsche’s belated yet highly significant turn to architecture.

Joerg H. Gleiter (Prof. Dr.-Ing. habil., M. S., BDA) is the head of the department of architectural theory and the managing director of the Institute of Architecture of Technische Universität Berlin. He has studied in Tübingen, Berlin, Venezia, and New York. He was a visiting professor at VIU (Venice International University) in Venice, at Waseda University in Tokyo, at Bauhaus-University in Weimar, and at Libera Università di Bozen-Bolzano in Italy. He is the founder and editor of the book series Architektur Denken, and co-editor of the International Internet Journal for Architectural TheoryCloud-Cuckoo-Land(Wolkenkuckucksheim). JoergGleiter is a two times fellow in residence of Kolleg Friedrich Nietzsche at Weimar. Among his publications are Architektur und Philosophie [Architecture and Philosophy] (ed. together with Ludger Schwarte, Bielefeld 2015); Ornament Today. Digital. Material. Structural (in English, ed. by Joerg H. Gleiter, Bolzano 2012); Urgeschichte der Moderne [Primordial History of Modernity] (Bielefeld 2010); Der philosophische Flaneur. Nietzsche und die Architektur [The Philosophical Flaneur. Nietzsche and Architecture](Würzburg 2009).