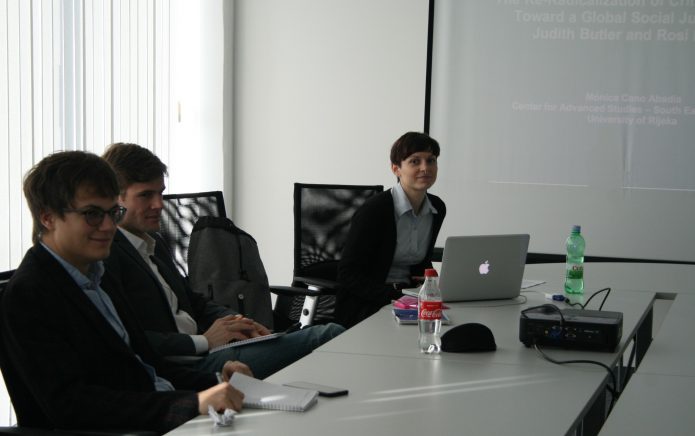 The Re-Radicalization of Critical Thinking. Toward a Global Social Justice with Judith Butler and Rosi Braidotti

“The research project The Re-Radicalization of Critical Thinking: Toward a Global Social Justice intends to carry out a diffractive reading on Rosi Braidotti and Judith Butler. A diffractive reading is a methodology that tries to read important insights though one another. What Braidotti has called the ‘transatlantic disconnection’ shows that they belong to different traditions within post-structuralist feminist philosophy. Nonetheless, I would say that their (dis)connections can be seen more as a fruitful exchange –as Butler proposes in Undoing Gender– and an interesting overlapping of perspectives that enables thinking about social justice.

Several are the differences between Butler and Braidotti, and both have addressed them in many occasions. In this presentation, I will diffractively outline some of the points of friction that are of the most importance for me in order to think –with and through them– about global social justice –namely, questions about the decentering of the humanist subject, negativity and lack, vulnerability, agency, relationality, or activism.

Both highlight the necessity of calling for action towards social transformation. Thus, I will argue that their recent scripts are of the most importance to analyze the agents of new thinking within a contemporary Critical Theory beyond neoliberalism.”

Mónica Cano Abadía, current CAS SEE fellow, obtained her Ph.D. in Philosophical Studies at the University of Zaragoza. She wrote a Thesis Dissertation on Judith Butler entitled “Identities at Risk of Exclusion. Subversive Strategies of Social Transformation”. She has been an Assistant Professor at the University of Zaragoza (Spain), and is a member of the Research Group Justice, Citizenship, and Vulnerability (University of La Laguna, Spain). In addition to lectures and publications focusing on queer theory, she has written on new materialisms, global justice and posthuman critical theory.