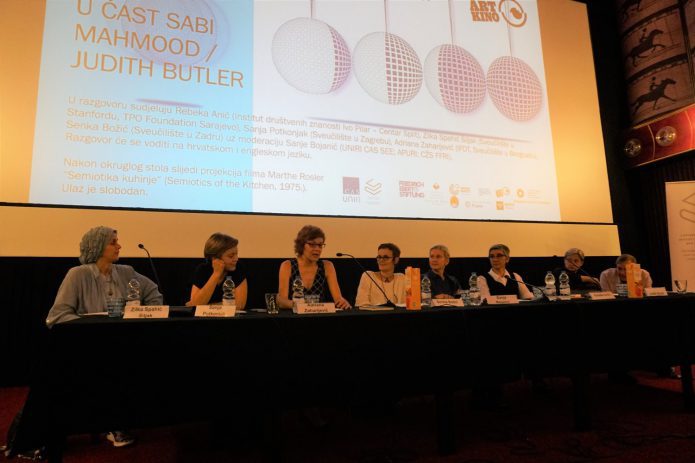 Round Table “In Tribute to Saba Mahmood” with Judith Butler

Round Table with Judith Butler “In Tribute to Saba Mahmood” took place at the Art-kino Croatia in Rijeka on June 20th 2018,  within the summer school “Critique of Violence Now: from Thinking to Acting against Violence” program.

The round table discussion, entitled In Tribute to Saba Mahmood, was dedicated to the recently deceased anthropologist from the University of California, Berkeley who dedicated her scientific research career to studying the relationship of different religious forms and sexual practices, in particular as regards women. At the conversation in Art-kino Croatia, guests from the region joined Judith Butler in evoking Saba Mahmood’s book Religious Difference in a Secular Age. A Minority Report, focusing specifically on aspects directly relevant to the regional context. Participating in the conversation: Rebeka Anic (Institute of Social Sciences Ivo Pilar – Split), Zilka Spahic Siljak (University of Stanford, TPO Foundation Sarajevo), Sanja Potkonjak (University of Zagreb), Adriana Zaharijevic (IFDT, University of Belgrade), Senka Bozic (University of Zadar), with moderation by Sanja Bojanic (CAS SEE, APURI). The discussion was held in Croatian and English. The round table was followed by the projection of Martha Rosler’s film Semiotics of the Kitchen (USA, 1975).

“Lubitsch in Rijeka” is a one day symposium held on July 3rd 2015, and is organized by CAS SEE in collaboration with Art-kino Croatia and Slovenska kinoteka. The participants of the symposium are a philosopher and honorary fellow of CAS SEE, Alenka Zupančić Žerdin, a fellow of CAS SEE, Aaron Schuster, Marin Lukanović  (University of Rijeka) and Sanja Milutinović Bojanić (CAS SEE, University of Rijeka). The Panel Chair is Jelena Androić (UKUS). The symposium will be held in English. The symposium, has been followed by screening of Ernst Lubitsch’s films – his silent short film “Als ich tot war” (Germany, 1916) and his comedy, The Shop Around the Corner (USA, 1940). Ernst Lubitsch was an extremely inventive and productive film author, in love with the theatre from his early years and a student of Max Reinhardt. He started to work on film as an actor but soon he switched to directing, easily mastering both spectacular dramas and ‘casual’ comedies. He is a winner of the first Oscar Lifetime Achievement Award in 1947.

“Squirrels to the Nuts, or, How many does it take to not give up on your desire?”

“Lubitsch: How We Fight”

“Comedy in Times of Austerity”

“Lubitsch Around the Corner”