On Thursday, January 14th at 4 pm CET, we hosted CAS SEE Weekly Seminar with Saša Vejzagić, in dialogue with our fellow Filip Balunović. The talk revolved around The Rise of Business Class and Managerial Elites in Yugoslavia, 1963-1978.

The thesis investigates an emergence of a business world in Yugoslavia in the midst of communists’ peculiar endeavor to develop a socialist society and a workers’ state. Its central focus narrows down on general directors in charge of large industrial (production) enterprises who in the period of liberalizing reforms between the 1960s and 1970s became both independent and powerful enough to attract the interest of the party leaders. The thesis provides the answer to the question of how Yugoslavia shaped its business environment and, more importantly, how the changes of the socio-economic setting allowed general managers to become relevant actors and even considered a homogenous group in both the public and the political discourse.

By delving into economic, ideological, socio-political, and legal domains of Yugoslavia’s life, the thesis identifies the first half of the 1960s as the critical moment for the emancipation of the managerial elite. It explores how the widespread modernization campaign, at the same time, accelerated the expansion of the Yugoslav economic potentials, while reproducing systemic contradictions that created the demand for new forms of company leaders. Since large industrial companies also appeared in this same period, the thesis explores their beginnings and relation of this phenomenon to the appearance of the new generation of managers. In its final part the thesis establishes the definition of the large production enterprise in Yugoslavia and builds a collective profile of its general director. In this sense, the typology of directors and the statistical analysis of their profiles, as well as their short professional histories, are at the heart of the thesis, giving a fresh understanding of their role in the Yugoslav political and business world.

Saša Vejzagić earned a BA (2008) and MA degree (2011) in History from the Juraj Dobrila University of Pula, and an MA degree in Central European History from the Central European University in Budapest (2013). Since 2015/16 he has been a PhD student at the European University Institute in Florence and will defend his thesis in February or March this year. Vejzagić is an associate of the Centre for Cultural and Historical Research of Socialism in Pula and a doctoral researcher at the project “Microsocialism”. In 2018 he started a project with Vladimir Unkovski-Korica titled “The Second World Does Business? Enterprise in the GDR and Yugoslavia” Vejzagić is interested in economic, business, political, labor, and social history of the 20th century with a focus on Yugoslavia in post World War II period. 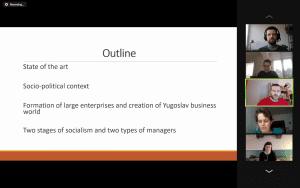 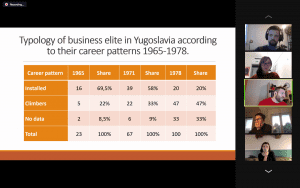