On Thursday, May 28th from 9.00 to 11.00 am we hosted the second CAS SEE Weekly Seminar with John Keane, presented by Vedran Džihić and Sanja Bojanić, and dedicated to the presentation (and discussion) of Keane’s new book The New Despotism.

In his path-breaking new book, John Keane, Professor of Politics at the University of Sydney and at the Wissenschaftszentrum Berlin (WZB), and the co-founder and director of the Sydney Democracy Network (SDN), analyses and connects the antidemocratic and illiberal developments seemingly scattered through our geopolitical reality, and invites us to recognize them as a steady formation of the despotism upgraded for the 21st Century. 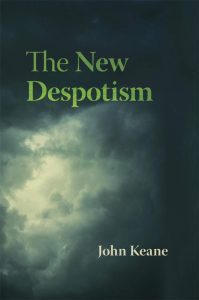 Despotism is an insidious form of totalitarianism, shape-shifting, complex and clever. Governments around the world have been mastering the forces of “patronage, dark money, steady economic growth, sophisticated media controls, strangled judiciaries, dragnet surveillance, and selective violence against their opponents”, and gaining influence in the population drained by deep inequality and disillusioned by what they perceive as inefficient and polarizing democratic politics. The consolidation of these top-down systems of power, plutocracies marked by top-to-bottom corruption, and media manipulation, mimicking democracies while dissolving them, is the key socio-political threat in the age of advanced technology, climate crisis, rising inequality, and post-pandemic biopolitics.

The detailed, sophisticated and deeply relevant examination of The New Despotism is one of the fundamental texts for understanding our current global political reality, and developing the theory and practice for upgrading democracy for the 21st Century, redesigning and strengthening the bulwarks of power-sharing against the creeping totalitarianisms, and making a different future possible. Ranked by Maclean’s magazine among top ten “books to watch in 2020”, John Keane’s book is described as “injecting one hell of a scary book into an already frenzied world”. In this edition of CAS SEE public seminar John Keane will present the book and establish links between his arguments and the great pestilence of our time, Covid-19 pandemic.

Important note: the seminars will be filmed by the CAS SEE. The personal data collected during this project will be managed according to the GDPR standard.