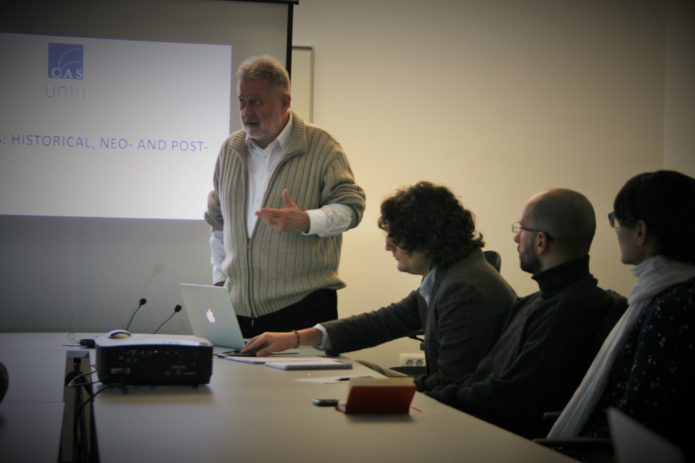 “Public discourses now usually describe the new anti-liberal and anti-globalist politics as “populist”. The term is problematic in many ways. It is pronounced from aloof and entails the suggestion that politics is a matter of expertise, not to be soiled by the people. Consequently, the implied position of uttering contradicts the explicit utterance-contents that presents itself as classically liberal. The term provides a hasty pseudo-solution to what should be examined as a problem: the mass appeal of those politics. By suggesting that politics is a matter of rhetorical adroitness, mainstream discourses legitimate and reproduce the presently dominating political practices in the Euro-Atlantic region that may be one of the causes for the massive discontent, which, in turn, offers social support to the new anti-liberalism. – Within the processes and practices that resulted in the destruction of Yugoslav socialist federation, an important, maybe decisive component were the politics that retroactively appear as an anticipation of the present extremist tide, and whom some of us described at that time as “fascist”. Again, this description seems problematic. As an anachronistic analogy, it may miss the specificity of the present situation. To avoid this trap, we shall look for systemic features, which now generate the familiar elements that have in the past combined into historical fascisms, but which may instead form new patterns in the present.” Rastko Močnik, sociologist, literary theorist, translator and political activist is a retired professor at the University of Ljubljana and a visiting professor at the Faculty of Media and Communications, University Singidunum, Belgrade. He teaches and publishes in critical social science, theory of symbolic formations, epistemology of the humanities and social sciences. Co-chair of the International Board of Directors of the Institute for Critical Social Studies, Sofia and Plovdiv. Doctor honoris causa at the  Plovdiv University “Paisii Hilendarski” (2005).