On Thursday, June 3rd at 10 am (CET) we hosted CAS SEE Weekly Seminar with Mate Nikola Tokić, presented by our fellow Nikolina Židek. The seminar was dedicated to the presentation of Tokić’s new book – Croatian Radical Separatism and Diaspora Terrorism During the Cold War.

Croatian Radical Separatism and Diaspora Terrorism During the Cold War examines one of the most active but least remembered groups of terrorists of the Cold War: radical anti-Yugoslav Croatian separatists. Operating in countries as widely dispersed as Sweden, Australia, Argentina, West Germany, and the United States, Croatian extremists were responsible for scores of bombings, numerous attempted and successful assassinations, two guerilla incursions into socialist Yugoslavia, and two airplane hijackings during the height of the Cold War. In Australia alone, Croatian separatists carried out no less than sixty-five significant acts of violence in one ten-year period. Diaspora Croats developed one of the most far-reaching terrorist networks of the Cold War and, in total, committed on average one act of terror every five weeks worldwide between 1962 and 1980.
Tokić focuses on the social and political factors that radicalized certain segments of the Croatian diaspora population during the Cold War and the conditions that led them to embrace terrorism as an acceptable form of political expression. At its core, this book is concerned with the discourses and practices of radicalization—the ways in which both individuals and groups who engage in terrorism construct a particular image of the world to justify their actions. Drawing on exhaustive evidence from seventeen archives in ten countries on three continents—including diplomatic communiqués, political pamphlets and manifestos, manuals on bomb- making, transcripts of police interrogations of terror suspects, and personal letters among terrorists—Tokić tells the comprehensive story of one of the Cold War’s most compelling global political movements.

Mate Nikola Tokić is Humanities Initiative Visiting Professor in the Department of History and School of Public Policy at the Central European University (CEU) in Vienna. He received his Ph.D. in History from the University of Pennsylvania in 2007 after earning an M.A. in International History from the London School of Economics. Prior to joining the CEU, Dr. Tokić was Assistant Professor of European and East European History at the American University in Cairo. Professor Tokić has held a number of positions at some of Europe’s most highly respected research institutes, including at the Robert Schuman Centre for Advanced Study at the European University Institute in Florence, the Berlin Program for Advanced European and German Studies at the Freie Universität in Berlin, the Institute for Advanced Study at the Central European University in Budapest, the Imre Kertész Kolleg at the Friedrich Schiller Universität Jena, and, most recently, the Center for Advanced Study – South East Europe at the University of Rijeka.His first monograph—entitled Croatian Radical Separatism and Diaspora Terrorism During the Cold War—was published with Purdue University Press in 2020. In addition to several articles on political violence and radicalization among émigré Croats, he has worked extensively on the relationship between social memory and political legitimacy in socialist Yugoslavia. 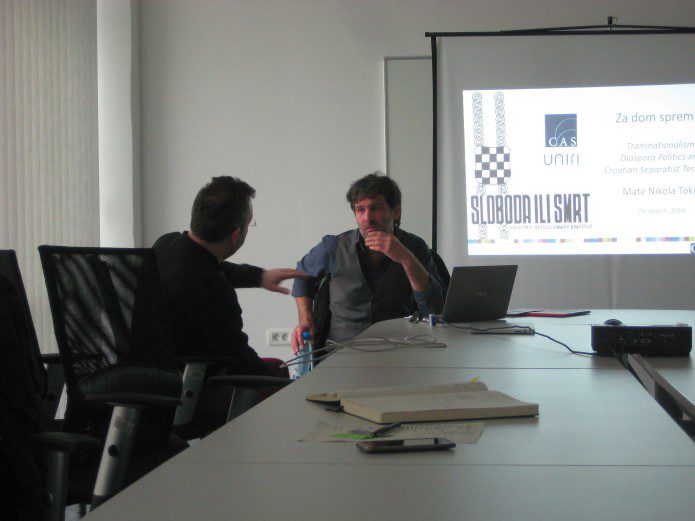